skip to main | skip to sidebar

I have been here in Madrid exactly one month and one day. Let me tell you this has been one emotional roller coaster of a month. The first week and a half I was so enthralled by everything, so new and exciting. But to my dismay all that was once new and exciting became not so new...or exciting but just an every day part of my new life.
I then began experiencing extreme mood swings and home sickness. One day I would be so happy and enthusiastic and the next I would feel empty and sad and long for the comforts of home.
But luckily that has all passed and I am looking positively forward to whats to come.
I have made quite a few new friends here. All from different countries as far as Montreal QC, Sweden, Finland, Germany, UK and of coarse America. We have taken advantage of each weekend and ventured away from the city to see other villages and monuments. I love the weekends!
So far I have visited El Escorial, Valle de los Caidos, Segovia, and many sites in Madrid. This weekend we are venturing out to Cuenca. It is to the east of Madrid and two and a half hours away by train! Bring it on!
P.S. Happy Halloween! 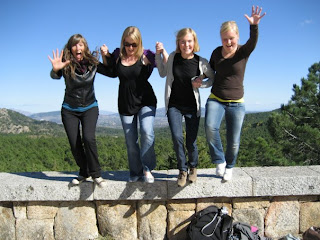 The whole "homesick" feeling has been haunting me a little the past week. It's probably because the whole "new and exciting" feeling has worn off. This is week 4 believe it or not! It's just the little things that put me in a homesick slump. For example I was cooking an egg the other day and all I wanted was a little Pam spray! :) Plus I miss all my family and friends and being able to just see them whenever.
So...I need to get over that because I am in Spain for goodness sake!!! Enough of that. Let me tell you about Segovia! 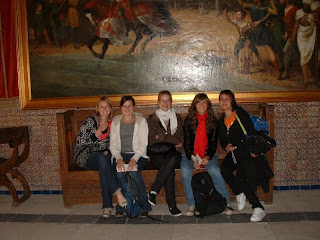 Saturday, five of us went on the train to Segovia, a gorgeous ancient city. 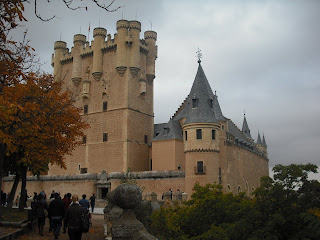 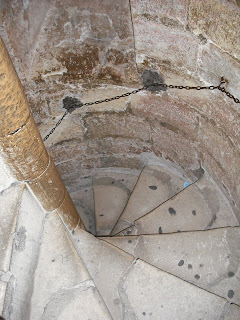 It is one of the most beautiful cities I have ever seen. The castle alone made me feel like I was in a fairy tale. Apparently it was this castle that inspired Walt Disney. Looking at the picture you will see what I mean. We toured the inside of the castle and also got to climb the tower to the top. It was 157 seven steps up a small stone spiral stair case.


Also posted are pictures of the Roman Aqueduct built over 2000 years ago and a picture of the Cathedral. It is awe inspiring!! 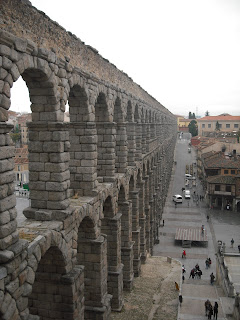 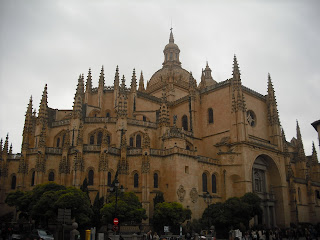 Yesterday my friend Anne and I went shopping for clothes. There is an H & M here which is mostly where I bought all my findings. Later that night we met a friend at and Irish bar called Dubliners. We ate dinner and watched American Football!! I was very excited :)

Also Friday night I finally got to try Spains famous Churros and Hot Chocolate at Chocolateria San Gines, rumored the best in Madrid! 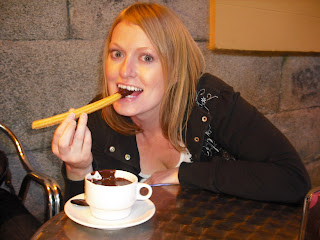 I finally start some more Spanish classes tomorrow(Tuesday). The classes are Tuesday and Thursdays from 5-7 pm. I cannot wait to get started. I know it will be a big help...so much for all the Spanish I took in high school and college. I don't know what happened?!?!
Posted by Crazy Rae at 5:18 AM No comments:

So It will be two weeks since I have been here on Friday.
What have I accomplished in these two weeks? Let's see...
I have mastered the Metro system, signed up for Spanish classes that cost
more than I wanted to spend but will be worth it hopefully. I have made a few friends
and have had a couple social outings, I have adjusted to the time difference. 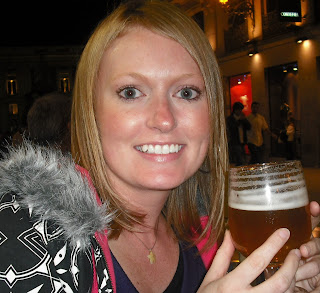 I am starting to get used to "Spain Spanish".(Much different from "Mexico Spanish") In fact yesterday someone called for Alvaro(the host Dad) and I was able to communicate and supply the caller with Alvaros mobile #. That felt pretty good I must say.

I am going to meet a guy named Gerardo who wants to do a language exchange. I am looking forward to
it because I definitely need the practice. Also tomorrow I am meeting with Choosas(Alvaros sister-in-law) brother, Ignacio, for an exchange. Hopefully these exchanges will give me a grasp on communicating without getting all nervous about it.

Today is my first day of actually feeling homesick. I thought I would not get like that but it could be the fact that I am home doing nothing and I am going to start my period in a few days, or maybe I am just missing home. Probably all of the above!

Tomorrow is a national holiday here. I am not sure which one I will have to ask. But there is supposed to be a festival in the city. It may rain so we may not go, we'll see.

I just Skyped with my Mom and when Emily comes over in a bit I will Skype with the both of them. That will be good!

Off I go!
xoxo
~R
My first outing away from Madrid at El Escorial in San Lorenzo. 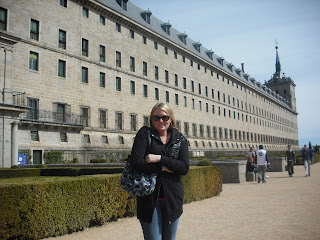